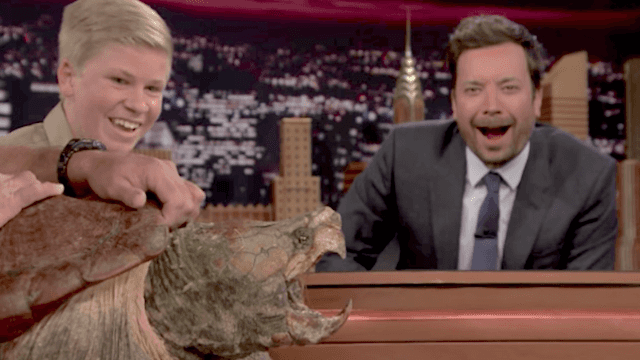 Robert Irwin brought a turtle to the 'Tonight Show.' Jimmy Fallon was terrified.

Robert Irwin, the 13-year-old son of the late Steve Irwin ofCrocodile Hunter fame, was a guest on Jimmy Fallon's Tonight Show on Wednesday night, along with the usual array of assorted exotic animals. Irwin (who is the spitting image of his dad) obviously loves working with animals and is such a pleasure to watch. Jimmy Fallon is also in the clip.

Exotic animal segments on late night talk shows are a strange old tradition. The hosts always act way too scared (maybe some really are), like they all got together and decided "let's be afraid of animals." It's one thing if it's a hawk or a snake, but these are some damn cute baby mammals.

Some hosts make it almost impossible for animal experts to get out what they're trying to say about these incredible animals by never shutting up. At least Fallon lets Irwin talk, although he maybe could have fit a joke in when Irwin, explaining the kangaroo's powerful leap, said it's "because of their legs."