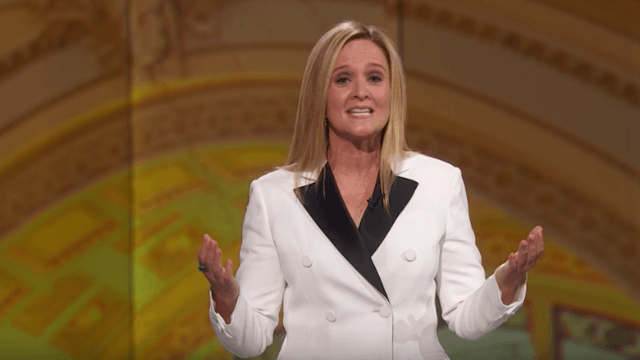 Watch Samantha Bee and friends tear Trump apart at the 'Not the White House Correspondents' Dinner.'

Saturday night in Washington, D.C., marked the annual White House Correspondents' Dinner—an occasion when the president and the Beltway media that covers him dine together and poke gentle fun at one another. But since even a gentle poke could puncture President Trump's mottled, flaky, orange skin, he declined to attend. Meanwhile, Full Frontal's Samantha Bee mounted an alternative event where nobody had to worry about being polite—Not the White House Correspondents' Dinner.

True to the promise of the no-holds-barred event, Bee carved out some time to once again roast Trump. "The maker of 'American greatness again' ran away from the Vietnam War, he ran away from two different Republican debates, and now he's run away from the Correspondents' Dinner," she said. "I guess we know why he wears those lumpy, ill-fitting, old-man pants: It's because he's constantly shitting himself." Bee then opened up the floor to other scathing comedians—including Tig Notaro, Patton Oswalt, Carl Reiner, Kumail Nanjiani, Billy Eichner, and Janelle James—to savage the sitting president.