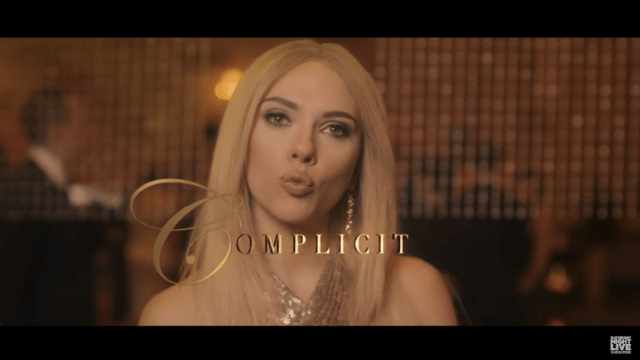 How does Ivanka Trump, someone who claims to care about women's issues, stand by her father, an admitted sexual assaulter? It's a very good question. She's been called out plenty of times for her fake feminism, as well as her involvement in Trump's agenda, and last night on SNL Scarlett Johansson debuted her Ivanka impression for a parody commercial pedaling Ivanka's new perfume line: Complicit.

"A feminist, an advocate, a champion for women," the sultry voice over says, as Ivanka's bejeweled hand pulls her straight blonde hair away from her face, voguing for the camera. "But, like, how?" It's a good question, and one that journalists like Lauren Duca have been asking for a while.

Ivanka Trump is poised to become the most powerful woman in the world. Don't let her off the hook because she looks like she smells good.