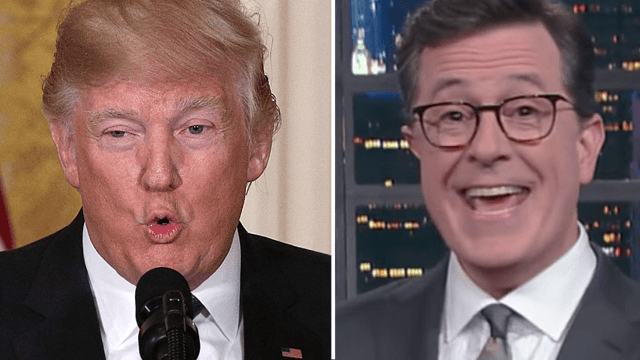 Stephen Colbert responds to the #FireColbert movement after his 'homophobic' Trump joke.

Stephen Colbert used his monologue Wednesday night to respond to the #FireColbert controversy that erupted after a joke he made about Donald Trump and Vladimir Putin.

Skip to the 11:00 mark for Colbert's insult rant, but here's the line that launched the hashtag:

"The only thing your mouth is good for is being Vladimir Putin’s cock holster."

Colbert made the comment after Donald Trump insulted his fellow CBS host, John Dickerson, calling his show "Face the Nation"—get this—"Deface the Nation."

Colbert then shot off insult after insult at President Trump, culminating in the controversial crack about Trump and Putin's sex life together.