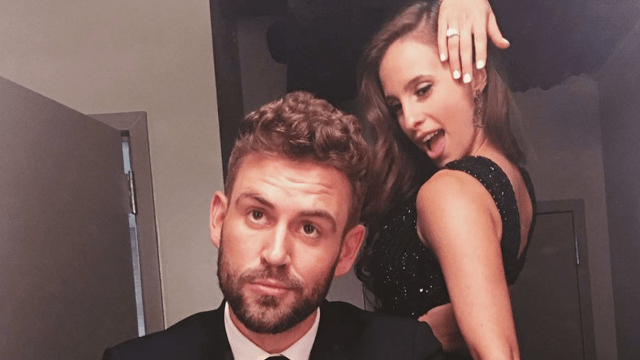 The engagement ring Nick gave Vanessa has been on a 'Bachelor' show before.

Good news, Bachelor Nation: we've got another juicy scandal for you! (At least, it's kind of juicy.) The most observant fans of The Bachelor may have noticed something familiar about the engagement ring Nick Viall chose to propose to Vanessa Grimaldi with in this season's finale - because the exact same ring has been on the show before.

The drama began when Claudia Oshry (known on Instagram as @girlwithnojob) noticed something familiar about the ring that nick gave to Vanessa on the season finale of The Bachelor. It looked exactly like the one that contestant Robby Hayes chose to propose to JoJo Fletcher with on last year's season of The Bachelorette. (You know, before she shot him down.)

Oshry's suspicions were later confirmed by People. They spoke to celebrity jeweler Neil Lane, who is The Bachelor franchise's go-to ring guy. He confirmed it was the exact same ring.