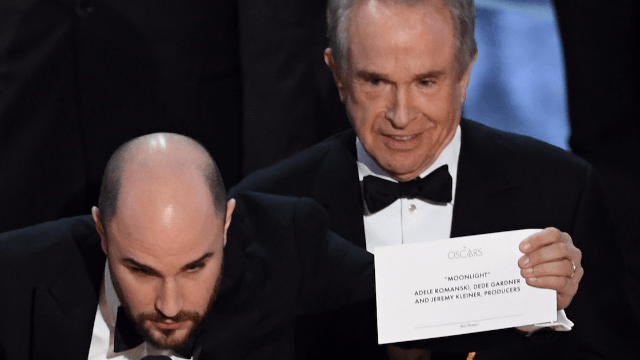 Faye Dunaway and Warren Beatty announced the wrong winner for Best Picture at the Oscars.

Wait, what just happened? The 89th annual Academy Awards show was allllmost over, the winner for the final category, Best Picture, had been announced—and it was La La Land. The announcement was made by Faye Dunaway, who'd just been handed the card to read by an odd-seeming Warren Beatty. A lot of people probably turned off their TVs and went to bed.

But hold up—there was some sort of mix up, and the real winner was Moonlight.

Amid the La La Land celebration onstage, Beatty held up a slip of paper to the camera over the podium, reading "Moonlight." And thus the mistake was revealed. Well, Jimmy Kimmel did say at the end of the night that he (Kimmel, not Beatty) was going to screw up the show somehow, so maybe it was his fault?