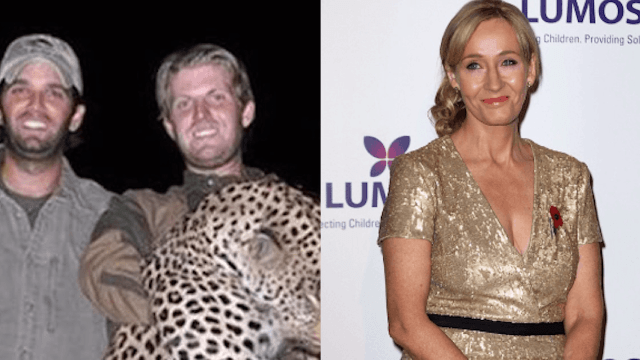 J.K. Rowling has the perfect reason why the Trump brothers wouldn't be in Slytherin.

Seeing the Trump brothers, Eric Trump and Donald Trump Jr., you might think that they're stereotypical "bad guys" (or bad hombres, if you will). They're sons of and cohorts with Donald Trump, a man whose presidential approval rating just keeps dropping. They dress and style their hair like the guys in American Psycho, and they even hunt big game. They've checked off a lot of villain boxes.

It's easy to think that in the world of wizard Harry Potter, the Trump brothers would be put into Slytherin, the house at Hogwarts where students who generally grow up to be evil are placed. Slytherin is the house of Potter's enemy, Draco Malfoy, and its symbol is a snake.