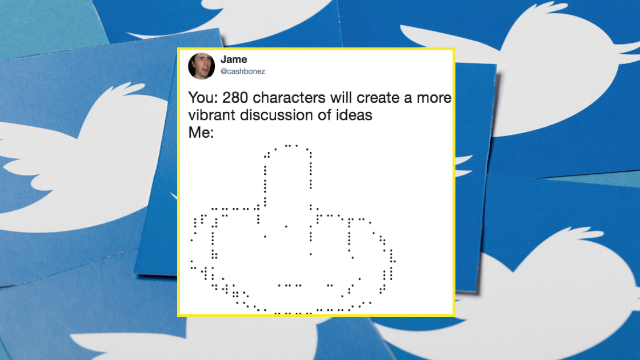 On Tuesday, Twitter chief executive Jack Dorsey announced that his site will be increasing the character limit in tweets from 140 to 280. He broke the news about the change via tweet, because, thanks to the increased limit, he can:

This is a small change, but a big move for us. 140 was an arbitrary choice based on the 160 character SMS limit. Proud of how thoughtful the team has been in solving a real problem people have when trying to tweet. And at the same time maintaining our brevity, speed, and essence!

Great! Now Twitter updates can do their best impressions of a Facebook status. Uh, wasn't the whole point of this platform to keep things concise?

Right now, the 280 characters are only available to a small test group, but will soon be rolled out to all users.

Twitter users had a lot to say about the change like "why?" and "no," but most of all, those in the beta testing group abused the new character limit by making jokes. Very long jokes.