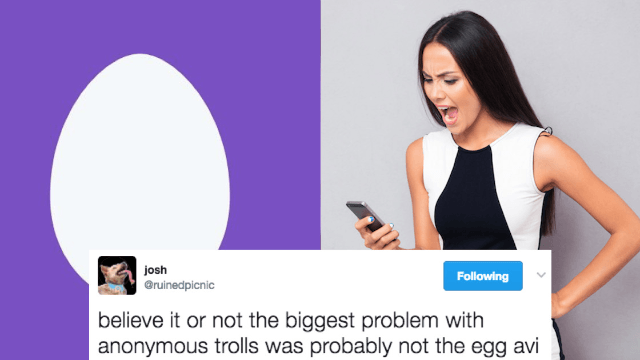 Twitter got rid of the egg avatar and people are not happy about it.

If you've looked at Twitter today, you might have noticed that the egg, which was the default avatar for anyone who didn't choose a user picture, is gone. Instead of the egg there's now a sort of silhouette of a person with a free-floating head, kind of approximating a human. According to their blog, Twitter changed the avatar to encourage people to pick photos, presumably in an attempt to cut down on random strangers who harass other Twitter users. They wrote,

We’ve noticed patterns of behavior with accounts that are created only to harass others – often they don’t take the time to personalize their accounts. This has created an association between the default egg profile photo and negative behavior, which isn’t fair to people who are still new to Twitter and haven’t yet personalized their profile photo.

However, this change doesn't address the abusive behavior of the human behind the profile. And of course Twitter users pointed that out.