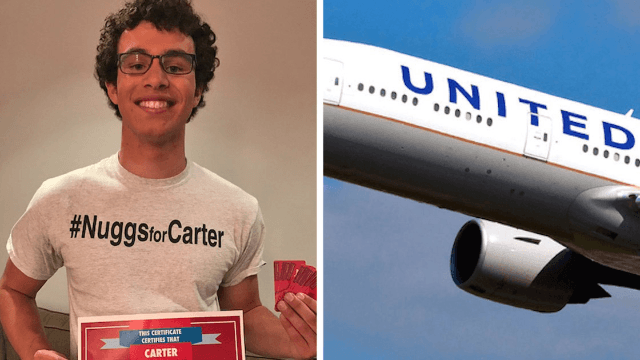 United Airlines tries to get in on teen's viral nugget karma, ends up very badly burned.

This is Carter Wilkerson, the lucky teenager who managed to secure a year of free nuggets from Wendy's thanks to a metric ton of retweets.

.@carterjwm is now the most retweeted tweet of all-time. That’s good for the nuggets, and $100k to @DTFA. Consider it done. #nuggsforcarter pic.twitter.com/k6uhsJiP4E

As Wilkerson made his dreams come true, United Airlines tried to dip a toe in the world of positive PR.

Hey @carterjwm, congrats on your world record! It’s time to decide where in the world you’d like to visit a @Wendys! DM to get the ✈ rolling https://t.co/3prDeaQdbL

If you remember the internet over the past month, you'll know that United's been on a losing streak since a brutal video of of David Dao getting dragged off one of their planes went viral. Since then, they've been accused of letting a rabbit die, making a woman pee in a cup, and sending a woman 3,000 miles in the wrong direction. And that's all on top of the leggings debacle from March.