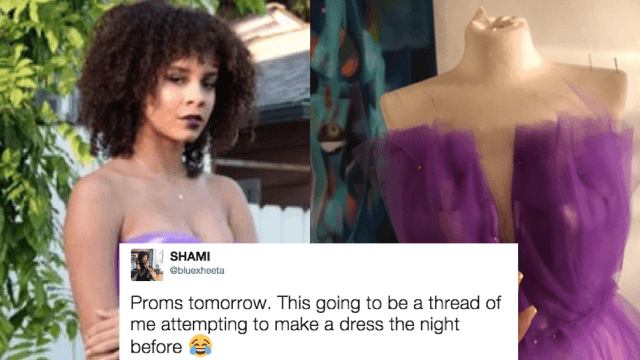 Meet Shami Oshun, a 17-year-old fashion designer who made her own prom dress as speedily as it is stylish.

Oshun told BuzzFeed that she was initially on the fence about attending the dance, but she ultimately decided to go, and had to make her dress at the last minute: the night before.

“I didn’t really have an idea of what the dress was going to look like. I was worried it wasn’t going to be finished," she said.

Oshun didn't crumble under the time crunch. She bought a whole bunch of purple tulle for $15 and got started, chronicling the whole process on Twitter.

Proms tomorrow. This going to be a thread of me attempting to make a dress the night before 😂 pic.twitter.com/04KogHxc6B