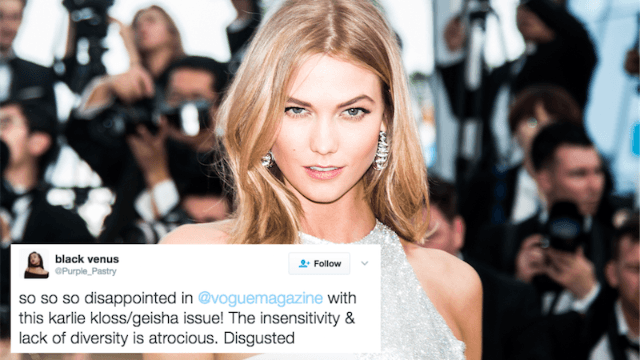 File this one under: "will we never learn?" Vogue's newest issue, which is meant to champion the "Modern American Woman," was already taken to task for its weak attempt at a diverse cover, especially for its light-skinned color palette and treatment of plus-size model Ashley Graham (many thought it strange that she was the only model with her hand down and that it was done to cover up her thigh). And after an inside look at the issue, there's yet another botched effort of inclusivity and multiculturalism in the form of Karlie Kloss dressed as a geisha, The Cut reports.

This was a very bad idea! It is literally crazy to imagine smart people who have dedicated their lives to making magazines and covering culture looking at these spreads and saying to themselves, "send these off to the printer, the world is going to love this!"