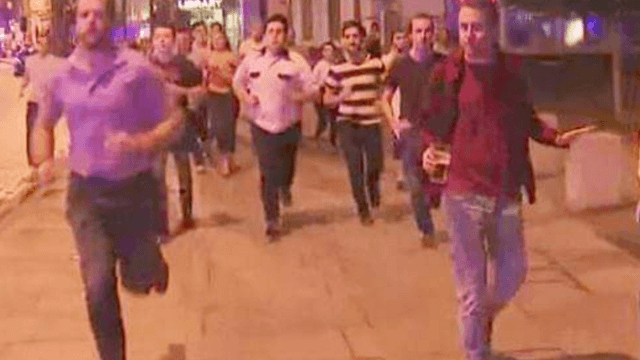 Guy who held onto his pint of beer while fleeing London terror attack is a drunken inspiration to all.

Details of the horrific terrorist attack on London Bridge and in the surrounding area last night are still unfolding, with 7 confirmed deaths, dozens injured, and hundreds traumatized by the chaos. But the heroism of Londoners in the thick of this violence was evident from the very start.

JUST IN: Witness to @NBCNightlyNews: People used pint glasses and chairs to fight back as at least 1 attacker entered a pub in London.

Still shut in Vauxhall Tavern. Air con unit still dripping. Madonna's Like A Prayer still playing.
We are safe.
We have gin.#London pic.twitter.com/c3REQWqU3v

With the attack coming late on a Saturday evening in the heart of the city, many Londoners were out drinking and found themselves either sheltering in pubs or defending them from the three assailants involved. Others had to flee their favorite watering holes—like this guy.

People fleeing #LondonBridge but the bloke on the right isn't spilling a drop. God Bless the Brits! pic.twitter.com/ceeaH0XxeX