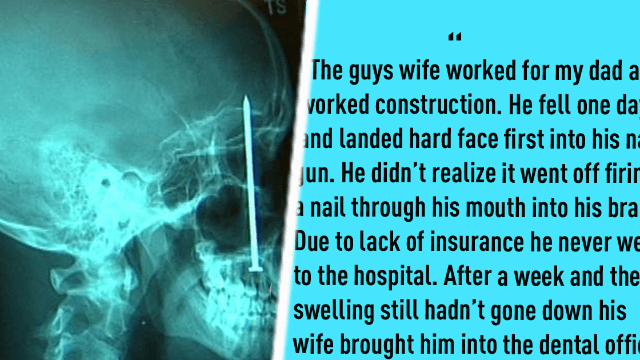 Doctors reveal death-defying cases that made them ask 'how are you still alive?'

The human body can survive a crazy amount of sh*t. People can keep trudging on despite injuries on traumas that according to all known laws of science should have been "Game Over."

Doctors on Reddit shared stories of the crazy medical mysteries who managed to defy death, whose survival begged the question, "How are you still alive?"

1. xGiaMariex's patient could face the car.

A patient I took care of had a car fall on his face. He was underneath it working when it slid off of the jack. The only reason he survived was because he broke every bone in his face (he had a Lefort III) which allowed for his brain to swell (he also needed an additional surgery to relieve the pressure of cerebral edema, but the facial fractures did allow for a great deal of "give" in his skull). I was rotating through ICU so I first saw him just a day after the accident. His head was so swollen, he didn't even look human. Fast forward a few weeks later...I was rotating through a different unit in the hospital and came across the same patient. He was quickly recovering and had minimal neuro deficits.