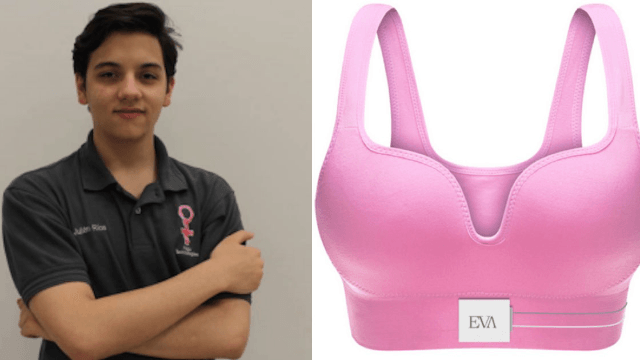 After mom almost dies, 18-year-old invents miracle bra that could save millions of women's lives.

Julián Ríos Cantú, an 18-year-old student from Mexico, has reportedly invented a bra that can detect signs of breast cancer, possibly saving millions of lives. His invention, called "the auto exploration bra," contains 200 sensors that spot early signs of cancer, according to the Telegraph.

Ríos Cantú says he was inspired to develop the bra after his mother battled breast cancer for years, eventually undergoing a double mastectomy. Apparently, getting a mammogram can often be difficult in Mexico, where there are only 9.5 mammography machines per million people, according to OECD statistics.

The bra doesn't even need to be worn all the time to be effective. Wearing the bra for just one hour a week allows its sensors to map the surface, texture, color, and temperature of the breast. According to the Telegraph, it then "relays the data to a computer or smartphone app via Bluetooth, where it is processed by a neural network. Heat sensors are able to detect blood flow, which often suggests that blood is feeding cancer cells."