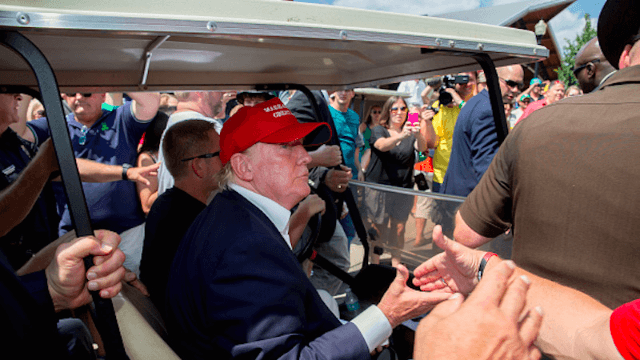 Trump is so lazy that instead of strolling with world leaders, he followed behind in a golf cart.

Donald Trump infamously accused Hillary Clinton of lacking the "stamina" to be president, but now, on his first foreign trip in the role, Trump is the one who's apparently "exhausted." And at no point has that been more obvious than when when he got together with G7 heads of state from the U.K., Italy, France, Germany, Japan, and Canada in Taormina, Sicily.

According to the Times, all the leaders walked "700 yards" from a group photo op to another spot in town—except for Trump, who apparently needed a ride in an electric golf cart to cover that ground.

The hits keep on coming. pic.twitter.com/tdFXc1NGdt