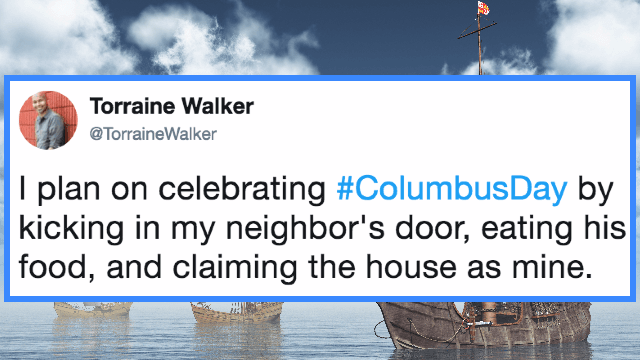 10 Columbus Day jokes for you to claim you discovered first.

Today is Columbus Day, a holiday that celebrates Italian explorer Christopher Columbus discovering America back in 1492–even though that's a made-up, whitewashed story.

As Business Insider explains, Columbus never actually walked on North American soil (he only "discovered" the Caribbean and Central America); indigenous people were already living on the land when Columbus arrived, but he colonized it anyway; and Columbus exterminated, enslaved, and physically abused the native people to make a profit. The details are gruesome and inhumane.

And while most American children are taught about Christopher Columbus in a positive light in elementary school, many of us figure out the dark truth sometime between high school and adulthood. Some people choose to completely ignore Columbus Day, some celebrate Indigenous Peoples Day instead, and others compose and tweet hilarious jokes.

So, here are some of the best jokes Twitters has to offer on this controversial "holiday."

I plan on celebrating #ColumbusDay by kicking in my neighbor's door, eating his food, and claiming the house as mine.