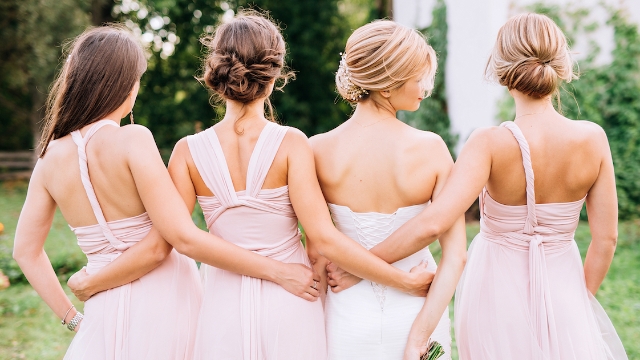 Bridesmaid asks if she was wrong to skip wedding after a gay bridesmaid was disinvited.

Bridezillas: we hate you see it, but we love to read about it. A now-ex bridesmaid shared a story on Reddit about ditching her friend's wedding to protest the friend disinviting one of the other bridesmaids for being gay.

The bridezilla, Kelly, had asked her friend, Ellis, to be bridesmaid. Ellis is in a same-sex relationship and her partner, Anita, was also invited to the wedding, so clearly Kelly was cool with it. But when Kelly's homophobic future in-laws found out one of the bridesmaids is gay, they called the bridesmaid all kinds of horrible slurs, and said she and her partner have "no business" being at this "sacred" wedding.

Instead of telling her homophobic future in-laws to shove it, Kelly gave in to their bigoted demands and texted Ellis to kick her out of the bridal party.

My friend Kelly is getting married next Saturday. She asked myself and 3 other friends to be her bridesmaid, her sister as MOH. One of our friend Ellis is in a same sex relationship. Kelly seems to have no issues with it since she asked Ellis to be her bridesmaid and invited Ellis' partner as a guest to the wedding.

Well last night Kelly texted Ellis and told her she's no longer a bridesmaid, she and her partner aren't welcome to the wedding. Ellis was confused and pressed for a reason. Turns out Kelly's FILs are furious "fucking gay sluts" are attending their wedding. It's a sacred place and dirty hoes have no business being there.