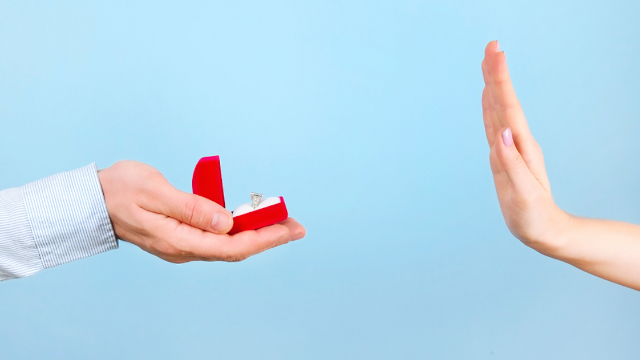 16 tales of rejected marriage proposals that will make you want to stay single forever.

Proposing to someone takes a lot of courage — but that doesn't mean you have to say yes.

Reddit gathered the most cringeworthy tales of rejected proposals and you might just resort to a life of solitude after reading these.

Your reasoning for this rejection checks out, frankbrutally.

It was in front of both sets of parents, and it was the only time in my life, before or since, that I literally heard a voice in my head. The voice said N O O O O.

Let me get out my tiny violin, chuck_cascio.

I once saw a guy propose in a restaurant where he had a fancy violin player come into a not-so-fancy restaurant (Perkins). He mad a big scene, and she said "absolutely not". They both left soon after. It was super uncomfortable. However, my friend told me his co-worker saw the same thing that same weekend at a different restaurant, so either two guys had very poorly thought out ideas, or someone was making a prank video. I search YouTube for it every now and again, but never found it.