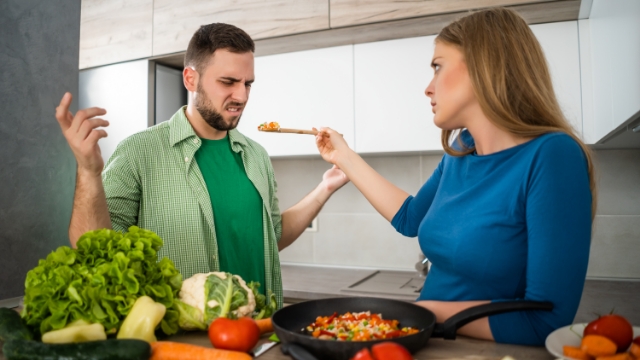 Woman asks if she's wrong for calling out husband's picky eating in front of their kid.

We all know kids can be picky eaters — but what happens if they never grow out of it?

That's what one woman is asking herself after her picky husband had a meltdown over their different eating styles.

She's asking Reddit for advice because her husband not only refuses to eat what she cooks, but refuses to sit at the dinner table with her and their child so that the kid won't grow up with messed up eating habits.

The woman says her husband's been a nightmare eater from the jump:

Husband has always been a picky eater. It has been a huge source of contention between us because I LOVE food. He has the palete of a 5 year old. He won’t eat vegetables or anything with “weird” textures. He sticks to pizza, hot dogs, chicken nuggets, etc.

She got over it for a while but now that they have a kid, it's starting to bug her again:

While dating, this was a huge issue, however we were able to reach a compromise. Now that we have a kid, however, its becoming an issue again. I brought up this issue before we had kids. I wanted to teach our kids good eating habits and I was concerned over his pickiness rubbing off on the kids. He agrees that his habits are unhealthy and he does not want our kids to learn his eating habits.