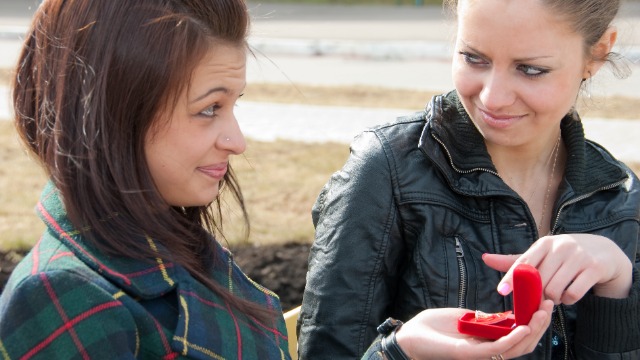 Woman asks if she was wrong for telling sister her engagement ring was 'fake.'

If your sibling gets engaged and you can tell the ring is a fake, is honesty the best policy or should you just shut up and congratulate them?

A woman recently posted on Reddit asking this question. She called out her sister's fiancé for buying a relatively inexpensive ring, and there's now a rift in the family. She's wondering whether she was in the wrong.

The woman starts out saying she's "suspicious" of her sister's fiancé:

This is an ongoing mess that continues to haunt me, my 22 f sister hannah 25 f is newly engaged to her bf of many years ben 25 m.

Ben and hannah are high school sweethearts, he's the only boyfriend she's ever had so she tends to take his word as the gospel truth but I've always been suspicious of ben, as I tend to be of all people to be fair.

Ben proposed at a family barbecue:

Hannah and I have very different world views, I've had quite a few boyfriends and one girlfriend, I believe is sexual freedom and exploring yourself and your sexuality, hannah only knows ben....

Anyway we had a small gathering of family round at my sisters house for a bbq in the garden. During the bbq ben got down on one knee and proposed.