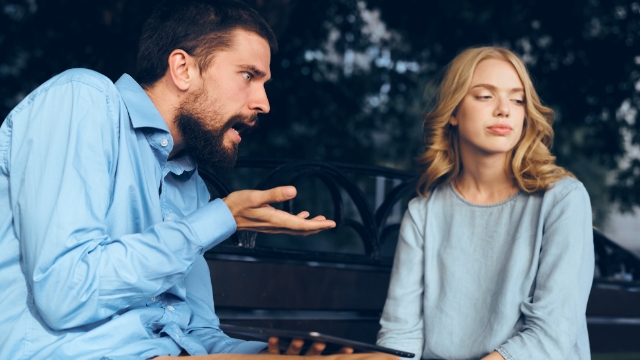 Woman asks if she's wrong for not telling strict vegetarian boyfriend he was eating bacon.

Dating someone with dietary restrictions can be rough — especially if they're really emotional about their diet.

One woman is asking the internet for advice after she allowed her "devout" vegetarian boyfriend to eat bacon, because she didn't want to deal with the temper tantrum he'd have if she told him. Yikes.

The boyfriend has a history of flipping out when he accidentally eats meat:

Background: my boyfriend has been a vegetarian since 12 years old. The few times we have eaten together and he’s eaten meat by accident, he’s become enraged, induced vomiting, and implied that I should somehow know and recognize every possible instance where something may contain meat or have touched meat. There was the dim sum incident and the pot sticker incident. Big deals, lots of vomiting, lots of yelling.

Recently, the two were out for a date and he ordered Brussels sprouts — not realizing they included bacon:

On this particular evening my boyfriend and I were out having a few drinks and decided to make a stop to fuel up. It was a nice restaurant and we both ordered some appetizers. He ordered brussel sprouts. After they arrived and halfway through eating them he commented on how delicious they were. I agreed, looked down at the plate and noticed little shiny bits of bacon. He stabbed his fork back in the pile and I thought “we’re having a lovely evening, let’s not ruin it” and continued to watch him devour the brussel sprouts...and bacon. I felt a wee bit guilty but didn’t want to have a big scene in the restaurant.