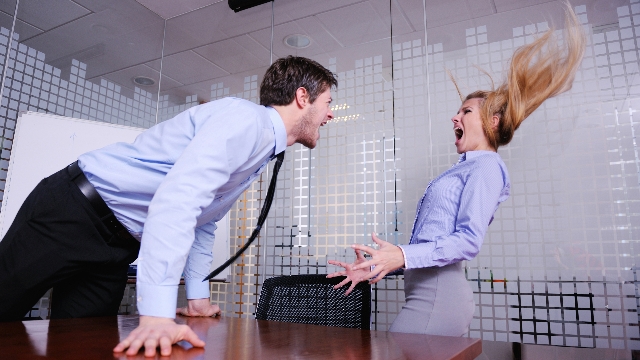 13 bosses share their most dramatic stories of firing people.

Being open about your feelings is good...except if they're your feelings of rage after you just got fired and drove you to commit some major property damage.

People who have had the honor and privilege of firing people on the job shared the angriest and most intense freak-outs they witnessed.

Pro tip: Make sure you're actually the manager before attempting to fire somebody.

Oh hell, so many times.

But, I did it. I came in to work the next morning to fire this guy. I didn't know what to say, so I was like "look, dude, I know this sucks, but as you know I've been made ASM, and my first order of business was to let you go." I barely got the words out before he was screaming at me, calling me names, telling me I didn't have the authority, and that he'd been there over a year.....and he refused to get out from behind the counter. So, I called my manager...but since he was a raging alcoholic, he was still passed out cold at 9 am. Meanwhile, the night shift dude called the owner of the business, who sent his son (one of the supervisors). I had the owner and the supervisor screaming at me (one in person, the other on the phone). The supervisor said that I needed to get the manager on the phone, and I better hope he answers, because if he can't fire him, he'd fire me instead.

I called, and the manager finally answers. He has a conversation with the supervisor that lasts about five minutes or so, while I'm sitting there freaking out about the likely event of getting fired myself. After five minutes, the supervisor looks at night shift guy and says "you're fired, get the fuck out." Then he turns to me and says "sorry about that. The f*ckhead manager never actually promoted you...he was just too much of a coward to do his job."

Two weeks later, I was the manager.