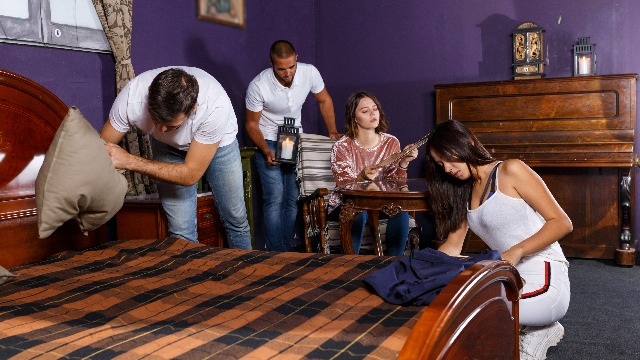 Escape rooms have become the hottest destination that welcomes both bachelorette parties and corporate retreats, entertaining its attendees with clever puzzles and moody set dressing. The "roommasters" who run the joints are either in character in The Escape Room Where It Happens, or watching over security cameras to make sure that the players don't poop in the set toilets.

A Reddit thread asked people who work at escape rooms, "what was the weirdest things you've witnessed through the cameras?"

The stories are as puzzling as the clues from the game.

A couple broke up in the room I was running... I then gave them loads of hints so they could get out ASAP. -VillainousStrumpet

2. Somebody needed to furnish their apartment.

The group of guests manage to pull an entire twin bed, mattress, frame and all, through a thin passageway and into the final room through the secret door. They thought it would be part of the puzzle. It was not. -DJ-Wallaby

3. People are eager to get into bed.

There was a room with a bed in it. Instead of continuing to follow the clues, two guests proceeded to put themselves to bed and then take a nap for half the time. They weren't hurting anything, so I let it happen. Before they left, they remade the bed and tucked two of our skeletons inside. -​​​​​​ThatsBalderdash