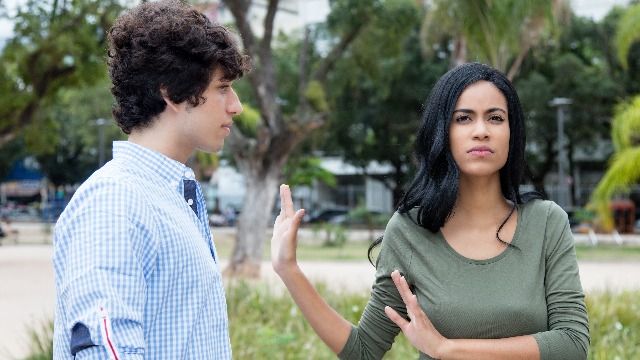 19 people share the most savage ways they were rejected after asking someone out.

Not all rejections are created equal. While it's incredibly crushing to have an unrequited crush, not everybody has had the privilege of being let down easy. Between decoy numbers, fake identities, and humiliations so very public in the cafeteria, these stories from lonely Redditors will make you glad that your most recent rejection was a simple swipe left.

The scene opens in a dim room where a sweet sixteen is being held.

Boy is coerced by friends to ask a girl to dance.

"Would you mind a dance?"

(In broken English) "Uh, I don't speak English. I am Puerto Rican."

(Luckily the boy is also of Latin descent and can speak Spanish) "Queres bailar?"

"Oh, I don't speak Spanish either."

Made the rest of the night horrible. -the_lonely

2. Be careful who you reject in middle school.

7th grade. A really cute girl asked me out. I said sure. We went out. A week later, I found out she only went out with me on a dare, and made twenty bucks for it.

About ten years later, I ran into her at a show my band was playing. We start talking, and she started hitting on me. After plenty of advances on her part, I realized she had absolutely no idea who I was.