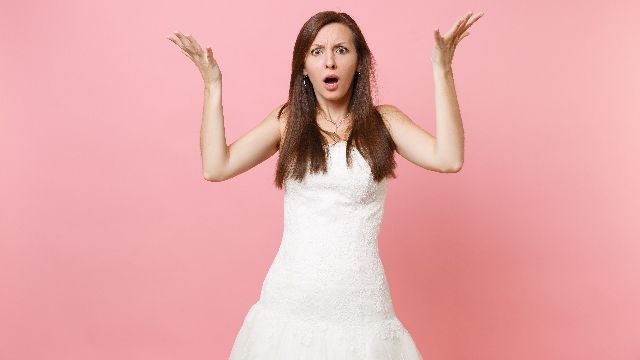 Woman asks if she's wrong for not apologizing after announcing pregnancy at sister's wedding.

A dare from their dad has two sisters in a fight, and their relationship is already fraught.

Sweaty-Wallaby wrote into "Am I The A**hole?" to ask the internet "AITA for ACCIDENTALLY announcing my pregnancy at my sister's wedding and not apologising?"

Emphasis on the "ACCIDENTALLY," but still: it's a classic case of thunder-stealing.

Sweaty-Wallaby provided the context of her relationship with her sister, complete with an observation from her therapist.

Backstory on me and my sister is that we've always had a competitive relationship. My therapist says we were put in competition against each other as kids by our parents and that's carried over as adults. Six months ago I sat down with my sister and we agreed that it's f*cked up how we both acted and we want to be loving sisters who aren't constantly trying to get one over on each other, and we came to a truce.

The truce came to a halt at the sister's wedding:

She got married today. I am 4+ months pregnant, so there's a baby bump. The dress I bought a few months ago with my sister was now clinging to said bump so I changed my outfit to a loose blouse and slacks to hide it, which worked, and texted her a picture of the new outfit along with a lie about spilling wine on the dress. She approved the new outfit. Once there an aunt comes over to talk to me and comments on me not drinking. I panicked and grabbed a glass of champagne and she left. When I thought no one was looking I gave my glass to my husband to take a sip from so it would look like I'd had some. Dad then comes over and says "something wrong with the champagne?" I say it's fine. Dad says "take a sip then". I hesitate and he says "you're not pregnant are you?". I go "please don't say anything, it's Sister's big day and we're waiting to tell people". He says he won't. Barely 5 minutes later another aunt comes over and congratulates us with tears in her eyes and hugs me. I know I should have said dad was wrong, but she was literally crying, so I tell her we're trying to keep it quiet because it's not our day and she nods, hugs me again, and leaves.