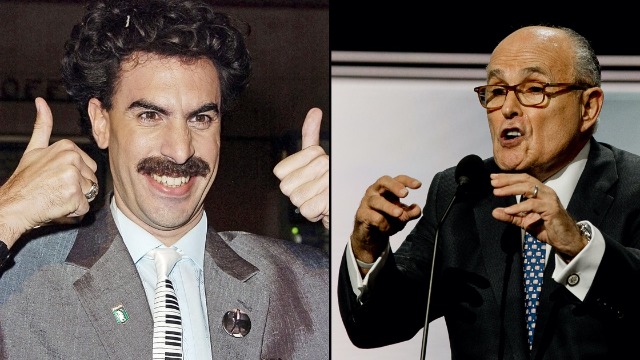 Rudy Giuliani, a man now famous for being Donald Trump's lawyer who was once famous for being a mayor of a city at a time, is in hot water. The former mayor of New York is facing questions about both national security and sexual impropriety for his appearance in the new Borat movie.

Sacha Baron Cohen returns as everybody's favorite Kazakh journalist, Borat Sagdiyev, in Borat Subsequent Moviefilm: Delivery of Prodigious Bribe to American Regime for Make Benefit Once Glorious Nation of Kazakhstan (aka Borat 2), available October 23rd on Amazon Prime Video. People and publications with advanced copies of the moviefilm movie are especially abuzz about one particular scene involving Giuliani and an actress who plays Borat's teenage daughter. The Guardian reviewed the moviefilm film, and here's how they describe what may or may not be the film's climax (ew):

Following an obsequious interview for a fake conservative news programme, the pair retreat at her suggestion for a drink to the bedroom of a hotel suite, which is rigged with concealed cameras.

After she removes his microphone, Giuliani, 76, can be seen lying back on the bed, fiddling with his untucked shirt and reaching into his trousers. They are then interrupted by Borat who runs in and says: “She’s 15. She’s too old for you.”