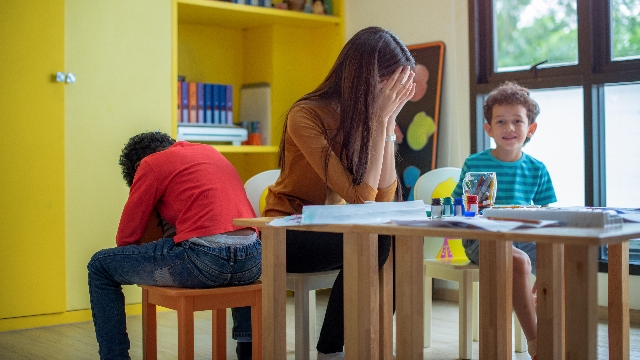 Teachers are sharing stories of students they suspected were sociopaths.

To paraphrase Whitney Houston, "I believe that children are our future, and killing animals is an indicator of even more sociopathic behavior."

Teachers on Reddit are taking the time between classes to tell the stories of the students who made them say, and I quote, "Oh god, this child is a sociopath."

Come for the juicy, high-stakes stories, stay for prequels to the next true crime documentaries.

1. Katydid2335 needs to consult a psychiatrist for the official diagnosis.

So I am not entirely sure if this is sociopath or psychopath but I had a child that was creepily into my pregnancy for the first 7 months. He wanted to name her, talked to my belly, etc. Then one day it clicked that I would leave and he got really close to me and whispered, "When you come out, I'm going to kill you with a hammer. I hate you."

I was shocked, so I took him with me to the office. The [Licensed Specialist in School Psychologist] asked why he said that. He replied that, "It will take her away. I want it to die so she stays here." He was on a lot of medication for his incredibly violent tendencies. He had tried to kill his sister before by pushing her in front of a bus. His mother kept him locked in his room at night because she had found him standing over her with a knife.

Edit: The child was a Male. 10 years old. His mother agreed to have him committed after he attempted to kill a police support dog using a pair of scissors. MHMR and CPS were both involved. I haven't seen or heard from the family since I left the district.