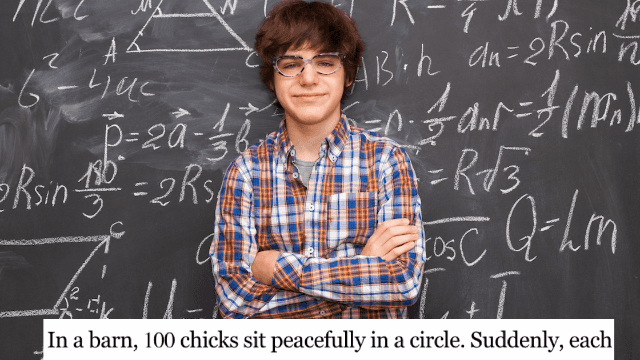 A 13-year-old solved this crazy math problem in less than a second. Can you do it at all?

You know that feeling when you realize kids are way smarter than you? Here's a math problem that'll make you feel like that.

According to the New York Times, 13-year-old Luke Robitaille won the Raytheon Mathcounts National Competition with the answer to the following word problem:

In a barn, 100 chicks sit peacefully in a circle. Suddenly, each chick randomly pecks the chick immediately to its left or right. What is the expected number of unpecked chicks?

Competitors only have a pencil and paper, and are given 45 seconds to buzz in with their answer. Luke apparently buzzed in with his answer to the question in less than a second. Can you figure it out?

Got it yet? We'll give you some more time.