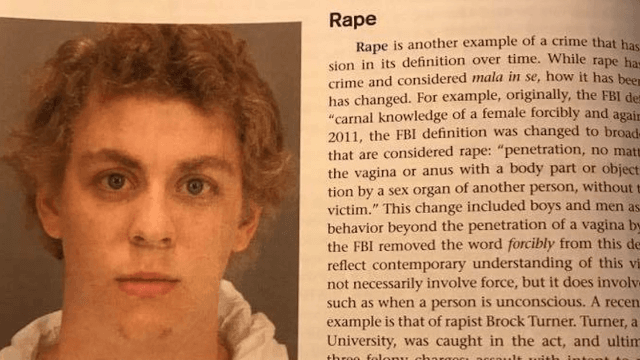 Brock Turner's face is in textbooks next to the word 'rape.' Twitter is cheering.

Remember Brock Turner, the Stanford student who raped an unconscious woman behind a dumpster in 2016 and was subsequently given a six-month jail sentence, of which he only served half? Of course you do. And if you didn't, you could just look him up in Professor Callie Marie Rennison's Introduction to Criminal Justice, second edition textbook, in the “rape” section, where he serves as the prime example of the crime. Basically, Brock Turner is the official poster boy for rape. Congratulations, Brock! You earned it, buddy.

Turner's case, along with the ridiculously light sentencing he was given, are used by the textbook as a recent example of a rapist. The caption for his photo reads, “Some are shocked at how short this sentence is. Others who are more familiar with the way sexual violence has been handled in the criminal justice system are shocked that he was found guilty and served any time at all.”