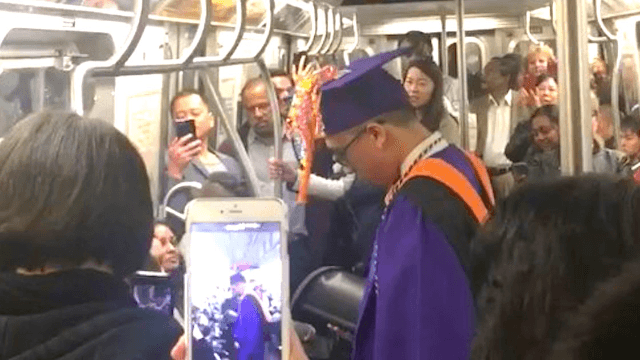 Subway riders saved the day when student on stranded train missed his graduation.

Jay-Z was right. New York City is a "concrete jungle where dreams are made of" and "there's nothing you can't do." Until the subway breaks down, which it does on the reg. And then you're pretty much screwed.

That's what happened to Jerich Alcantara, 22, who got stuck underground on the E train and missed his commencement ceremony from Hunter-Bellevue College of Nursing on Tuesday.

"I was on track to be at my commencement at 9:15 a.m., but the delays altogether ended up taking almost three hours," Alcantara told New York Magazine. "After 45 minutes, I knew I was already late, but I kept hoping that I’d at least make it to walking the stage."

Welp, he didn't get to walk the stage. But he DID get a complete "graduation ceremony" on the crowded E train, with the support of his fellow subway riders.