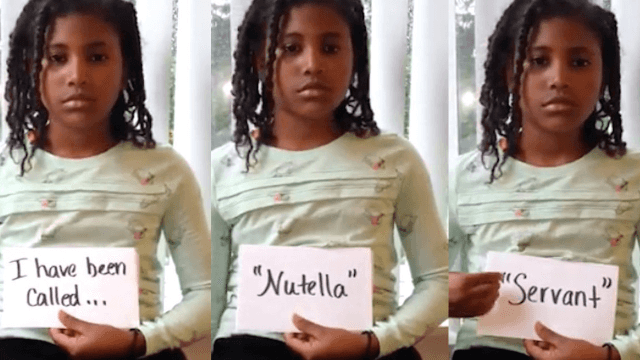 Girl calls out her racist bullies in viral Facebook video. The internet is good for something.

Good morning, here's our daily reminder that the U.S.A. has a huge racism problem and also a bullying problem and neither will go away if we simply ignore them. A fourth-grader named Nasir Andrews who lives in Bellevue, Washington, says she's been the target of racist bullying at her elementary school ever since she started at the school in September. But despite expressing concerns to teachers and school administrators, she says no one intervened.

"A student called me 'Nutella' and I told my after-school teacher and she said it wasn't racist and she made me write the definition of racist," Nasir told KIRO-7.

Nasir is one of about 40 black students at Ardmore Elementary, which has a large population of Hispanic, Asian, and Indian students, KIRO-7 reports. The girl's parents, Chantey and Travis Andrews, said they've been been complaining about the bullying for months but no one did anyt the district at one point "investigated" the situation. But they categorized the bullying as "unfortunate peer to peer interaction."

So Nasir did what so many of us do when the system fails us: she took to Facebook. In a video which has since been shared over 35,000 times, the girl used handwritten note cards to call out her racist bullies and tell her story. "I want adults and kids to know my story," she explains in the video. "Bullying is real."

It's heartbreaking that she had to make this video, and extremely badass that she did. You can watch here: