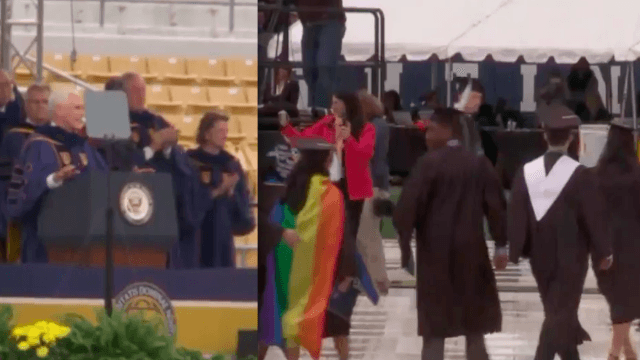 While President Trump is busy curtsying to Saudi royalty, Vice President Pence is stuck here in the U.S. trying to give advice to this year's crop of college grads. Which might be easier if they didn't already know what divisive and hateful ideas he stands for.

On Sunday, Pence was in his home state of Indiana to deliver the commencement speech at the University of Notre Dame, an 85% Catholic school. In the days leading up to this appearance, a student coalition calling itself We Stand for ND called on students to reject Pence's views on LGBT and women's rights, immigration, and criminal justice by simply getting up and leaving the ceremony when he took the podium.

"The participation and degree-conferring of VP Pence stand as an endorsement of policies and actions which directly contradict Catholic social teachings and values and target vulnerable members of the University's community," Xitlaly Estrada explained in a press release shared on social media.