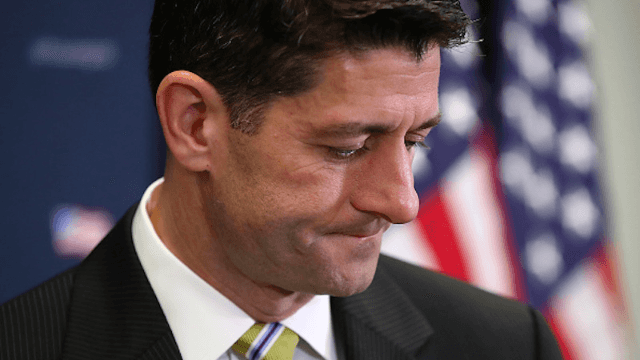 Paul Ryan got snubbed by a bunch of 8th graders at his D.C. photo-op. The children are our future.

House Speaker Paul Ryan, after repeatedly kowtowing to an unhinged President Trump and championing a healthcare bill that would cause millions to lose their insurance, is so politically toxic that even 8th graders won't pose with him.

The kids were on a Washington, D.C. field trip from South Orange Middle School (my alma mater, no big deal) in South Orange, New Jersey, and on Friday they had the opportunity to pose for a photo with Ryan during their tour of the Capitol. About half the class, or some 100 students, refused—and stood in a parking lot across the way. Which helps to explain this awkward result.

According to local news source The Village Green, the SOMS students had pointedly political reasons for the snub. "I think that taking the picture represents that you agree with the same political views and I don’t agree with his political views so I chose not to be in it," said Wendy Weeks, while Louisa Maynard-Parisi explained: "I didn’t want to be in [the picture] because he believes in most of what Trump believes in."