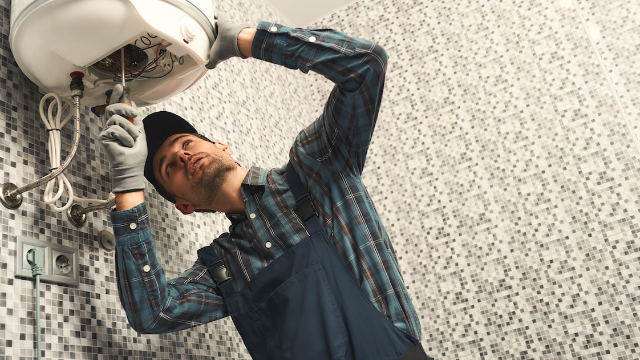 People who work in home maintenance, like handymen, plumbers and electricians, enter strangers homes on a regular basis, getting a unique glimpse into the behind-the-scenes realities of people's lives. As you can imagine, they encounter some really, really weird sh*t.

Someone recently asked Reddit: "People who enter other peoples' homes as a part of your job, (Maintenance workers, etc.) What's the weirdest thing you've seen inside someone's home?" Here are 31 of the most bonkers replies from people who have truly seen it all:

I used to install smoke alarms for the hearing impaired (50% elderly and 50% deaf) all over the state of Oklahoma. I would get addresses for the installations the week before and plan routes accordingly, meaning i would just put the addresses into google and check out the earth/map views.

This place I'm thinking of was in the middle of nowhere, which is saying something considering that the entire state of Oklahoma is in the middle of nowhere. When my ASL interpreter and I made the trip, we had to ramp our minivan over a nearly washed out bridge, bounce down a forest road, and choose which of three broken down trailers these people were using as shelter. Looking back, we really should have just called it before ramping the bridge.

Once there, we met the people and they explained (in ASL through my interpreter) that they had a tornado rip through their home that ended up sparking a fire somehow, that explanation never made it through translation.

Since then they had decided to be more fire safety conscious, which i applaud but their home had holes in the roof the size of people. One wall was just a tapestry of duct taped trash bags. I didn't feel right just installing fancy smoke alarms when they clearly needed much more help... but there wasn't anything i could do.

So I'm doing the only thing i can do, installing smoke alarms, explaining basic fire safety, teaching them to use their bed shaking devices (these folks were deaf), and when i start to explain that they should exit the home without stopping to grab anything including pets, they stopped me and explained that their pet is very valuable. As in it had a monetary value.

I'm not one to pry, so i took this at face value and reiterated the importance of leaving the home immediately if it is on fire, especially because it's a trailer home. They had a long, silent conversation with my interpreter during which she looked more and more concerned.

The occupants go into a room i hadn't yet entered and emerge with a f*cking bald eagle on a leash.