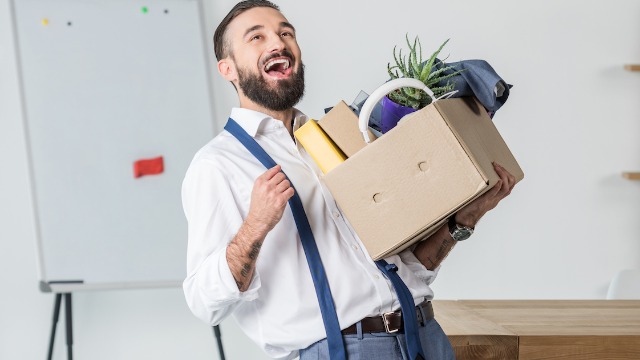 19 people share the messiest and most dramatic ways they've seen a co-worker quit.

The general rule when it comes to quitting your job is to give two weeks notice, be polite, and leave on good terms. Even though it would be WAY more satisfying to walk out in the middle of the workday after telling your boss or co-workers how you REALLY feel about them. But while many people fantasize about dramatically quitting their job in a blaze of glory, some employees actually have the guts to do it. They may not end up with good references, but at least they'll always have a good story to tell.

Someone asked Reddit: "What is the strangest way you've seen someone quit [their job]?" These 19 people share their most dramatic and unforgettable quitting stories:

Context: my boss (retail) called me into work for noon and was showing me how to check the company email and set alarm codes for the doors and then gave me the password to his company blackberry. This was strange, then when the regular guy came to start his shift at 1 he closed the store and came out with all his stuff and said "I am officially done with this company as of right now". The phone started to ring and I reached to grab it, knowing this was the district manager and not wanting to confront him he literally ran out of the store and I haven't seen him since.

Apparently he had just emailed the district manager to say he had resigned and wanted no further contact.

The other guy and me have only worked at the store for a month.