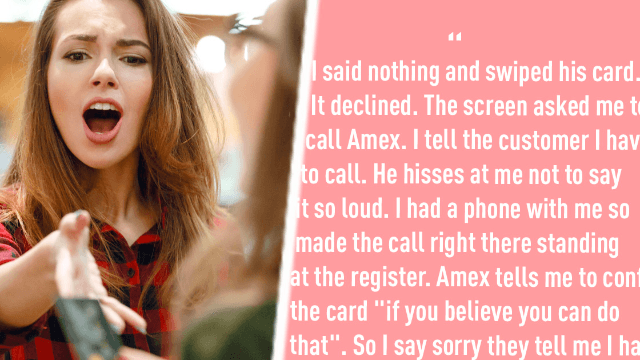 Cashiers shared the craziest sh*t that's gone down when a card got declined. Wow.

It happens all day, everyday: You go into a store, take stuff to the counter, swipe your card and… it gets declined. Well, now what? Do you internally panic that you have less money than you thought, or calmly ask the cashier to swipe the card again?

Or, do you totally freak and make a whole situation out of it.

People with experience behind the register took to Reddit to share their craziest stories about what customers did after they got that "DECLINED" message.

1. ThinkHamster was MAD WITH POWER or something.

I had one lady who screamed and accused me of purposely making her card decline to embarrass her. As if a 16-yr-old making minimum wage somehow could manage that, or would have any reason to do that to a stranger.

2. xakeridi dealt with a guy who didn't have a lot of Borders.

I was working at a mega bookstore. A man came up with two or three serious philosophy books.

Then he flicked his credit card at me. Don't do that to a cashier. Just don't.

I said nothing and swiped his card. It declined. The screen asked me to call Amex. I tell the customer I have to call. He hisses at me not to say it so loud. I had a phone with me so I made the call right there standing at the register. Amex tells me to confiscate the card "if you believe you can do that". So I say sorry they tell me I have to take your card.

I cut the card in half. I still feel good about that day.

I was working in a service station (fuel station for those of you outside of North America) that accepted credit cards branded by the oil company that supplied the fuel.

A man and his brother come in to pay for fuel for their car. I run the card through the system, and it is rejected. I call the card processor and am told the card is to be confiscated (we got a bounty for confiscated cards in those days).

The brothers aren't happy with that, and try to physically take the card from me. The mechanic in the garage bay notices the altercation, things escalate, and the more physical brother is pushed out of store by slamming the door on him. The more calm brother calls the owner of the car, his father. The brothers are sure their dad is going to fix this and get the card back. The dad comes in, and calmly explains to his sons the card is not coming back.

Apparently the father was behind on his bills, and it wasn't the most ideal way for his sons to learn that their dad was in financial trouble.

4. Well, it's either her or the ATM, Nach0Man_RandySavage, and humans don't make mistakes.

Not a cash register but our ATM. Card declined for insufficient funds, lady says, 'Oh what a shame, this ATM must be out of money.' Yep, that must be it.

5. npaige4 says you can fake a phone call at times besides when you're trying to bail on a bad date.

Had a customer fake an entire phone call. He pretended his bank called him immediately after getting his card declined. The phone never rang he just put the phone to his ear and said, "yes hello this is mr.so-so. I can't believe your bank embarrassed me in front of this nice young woman. I know I have at least 50,000 in the bank. Next time we talk it will be at my convenience." Then he put his phone away and apologized ran out to his car and got cash to pay for his items.

6. Way to blow everything for Dr_Quink, you daft git of a bystander.

Back in the 90s, I worked for Rumbelows. Had a guy pick out a new TV and VCR wanted warranty, nice easy sale. Trouble is I noticed the signatures were a bit different and in those days anything over £100 you had to phone through for authorisation. So I did and the card was stolen. Lady at the other end of the phone said I was as much as possible supposed to hold the line and keep the customer in the store as the police had been called. So I say to the guy, sorry it seems their system is playing up, so it's going to take a while for the authorisation to come through. He seems fine with it. Waited and waited what must have been 20 minutes and another customer said, "You know what mate, you're making it look like he's stolen that card!" I told him that I was just told to wait for the auth code and that would take a while, cos their system yada yada. Card bearer pegged it out of the shop, I could now explain to the "good samaritan" that the card was stolen and in the nicest possible way that he was a dick and should keep his thoughts to himself.

Got paid £50 for the card, handed it to the police who turned up about 5 minutes after he'd bailed. Told them what he was wearing but he was long gone.

One lady gave me her card and asked for scissors to cut up her old one. She was cutting as her card I was running got declined. She cut up the wrong one. Nothing I could do. She was pissed.

Guy was very sure he had just gotten paid, saying there should be over $2k in his account. I politely incline that he may want to call his bank and see if the bank had froze his account for any suspicious activity.

The guy comes back about 30 minutes later thanking me, tells me someone had gotten $500 dollars out of his account and the bank had indeed froze his account.

9. coffcat shares a story about the true meaning of Christmas.

Several years ago, day after Christmas at Target. Woman has three carts full of marked down Christmas merchandise. My scanner was broken so had to hand type each UPS code in by hand, needless to say it took a while. Customer snottily complains about how much I was inconveniencing her by taking so long. Finally finish ringing up her purchases and she hands me a card. Declined. She had me run it again. Declined again. Sighing outrageously she pulls out her wallet and flips it open. I swear the woman had like 20 credit cards, she starts wiggling her fingers over them like she's picking a tarot card. Hands a new card to me, declined. Another card, declined. Has me try several cards more, all declined. Finally super pissed she writes me a check, in mounting glee I tell her it's declined also. She slams her front cart away and stomps out the exit. Lady behind her asks if her items are up for grabs. I say yep and proceed to watch as a horde of people ravage the contents of the carts. It was awesome, like watching sharks eat chum.

10. "HAHAHAHAHAHA never heard that one before." —Suhn-Sol-Jashin

11. Or, as blahblahrasputan shows, you just plan ahead for when the card doesn't work.

We see a fairly clever "smoke & mirrors" routine at my liquor store.

Customer comes in, walks to the spirits/hard liquor section and puts one bottle under their shirt while picking up a second and walking back to the register with it. They attempt to buy the second bottle with a card that they know will decline. Then they say they have to call their bank and dial a number as they leave.

I had a guy who pulled cash out of his wallet to pay, but before he handed it to me, he stopped and said, "oh wait I can earn points on my card." So he got his card out and swiped. Declined. Tried again, declined. So he says never mind and just leaves his stuff. It was only like $40 bucks, but I was like, you don't want it because you can't get points?

No clue what that was all about.

I once had a woman scream at me and call me a bitch, then she dumped her purse out and started showing me expensive makeup to prove she's not poor and broke. "Could I afford a $50 lipstick if I were broke? No I could not!" (It was a lipstick that normally sells for $25 or so anyway.) She demanded I "push it through" like I had any ability to do something like that. The manager came up and told her she had to leave because we couldn't push a transaction through a declined card.

14. pedantic_dullard got bit in the butt by karma…the good kind!

I was a manager at a fast food Italian restaurant and another store needed help for a week. I volunteered to go help, they were a couple hours away, and left that day.

I was working the register one lunch shift when a construction guy came in to order pasta and subs for the crew. His goal was somewhere around $60 and, of course, his card declined. This was in the mid-90's, and credit wasn't widely used there, but the guy had no cash.

I told him if he promised to tell his entire crew they had to come in with their families, I'd take care of it. After lunch we over everyone told me I was gullible and naive, and we'd never see him, his crew, their families, or my money again.

The next day, however, they all ate their words. They did show up, their office staff showed up, and a few of their families also.

My buying their $60 lunch brought the store about $175 the next day, the boys guy paid me back, and I heard they got a small catering gig at Christmas for it.

After third time it got declined, he grabbed his groceries and ran out.