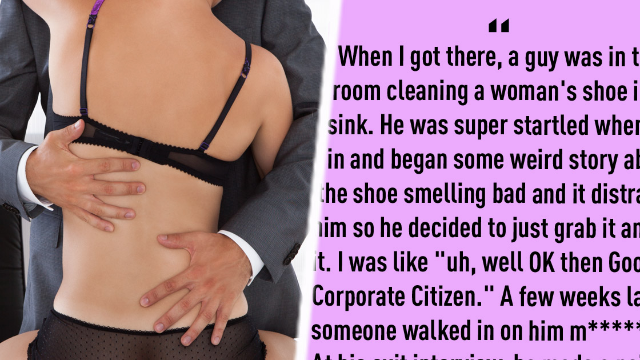 People share stories of Not Safe For Work things they witnessed at Work.

"NSFW" is, by definition, something that is, hello, not suitable for work. But that doesn't mean that NSFW never happens at work, it's just still not…suitable. Over on Reddit, people shared the times that they witnessed incredibly inappropriate stuff in a professional setting.

1. After reading lendergle's story, you will never leave your shoes anywhere alone ever again.

Went into work because monitoring software on a server was sending out alerts. When I got there, a guy was in the break room cleaning a woman's shoe in the sink.

He was super startled when I walked in and began some weird story about the shoe smelling bad and it distracting him so he decided to just grab it and wash it. I was like "uh, well OK then Good Corporate Citizen."