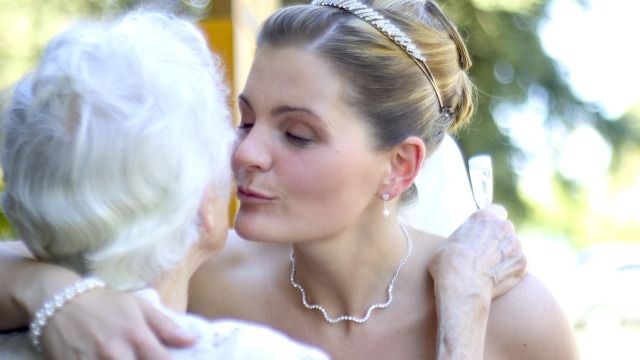 Bride asks if she's wrong for fighting with grandma over 'revealing' wedding dress.

Reddit user u/Own-Entrepreneur3640 loves the dress she chose for her upcoming wedding, but her grandma thought it was too sexy.

Now, this bride-to-be is asking the internet, "AITA (Am I The A**hole) for telling my grandma not to touch my wedding dress?"

I (23F) am getting married, and just picked up my wedding dress. It’s not going to be in alterations until closer to the wedding. Until then, I asked my grandma if I can keep it at her house so my fiancé doesn’t accidentally see it. She said yes.

When I brought it over to her house, I tried it on and showed her. Overall she liked it, but she is an old-fashioned elderly woman, and of course, did not like that I looked so “busty” in my dress. I have a large chest, it doesn’t matter what I wear, anyone with eyes can see that I have big boobs.

She then started eyeing my dress and said she is going to make changes to make it more “modest”. I said that wasn’t necessary, because I already have alterations being done in the future by the bridal salon I got the dress from.