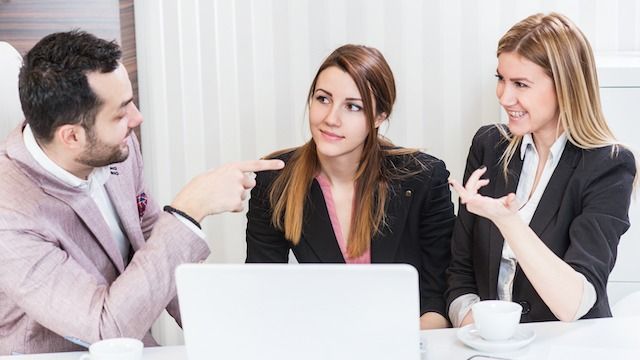 Woman asks if it's bad to let 'mean girl' coworker embarrass herself while flirting.

There are always jealous people trying to take you down, for whatever reason. Mean girls sneaking in backhanded compliments, subtle jabs, and insults disguised as "jokes." There's nothing better than when one of these people embarrasses themselves and you get to just sit back and gloat.

That's the situation Reddit user u/Sensitive_Boat4256 recently found herself in when her work frenemy unknowingly hit on (and got rejected by) her boyfriend.

AITA (Am I The As*hole) for allowing a work acquaintance to embarrass herself by unknowingly asking my boyfriend out?​​​​​​

I (Paula, 31/F) attended a large, multi-day work conference that my boyfriend Tom (48/M) also attended. We work for different companies, network with different people, and pretty much only saw each other when it was time to go to sleep.

Most people don't know we're together because neither of us has a social media presence or talks about our personal lives that much. I primarily stuck with the people I knew from my office (Sarah and Marilyn) and a couple of other people that I knew from school.