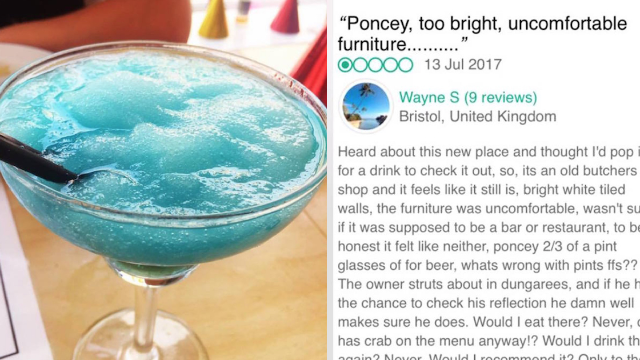 Restaurant trolls one-star reviewer by naming a drink in his honor.

A restaurant in Bristol called The Old Butcher's rolled with the punches after receiving a particularly bad review on the travel site, TripAdvisor. In fact, they "took the piss" (as the English say) by naming a cocktail in honor of the fellow who wrote it.

The review, which gave the place just one star (probably because he couldn't give zero) was titled "Poncey, too bright, uncomfortable furniture.....":

Heard about this new place and thought I'd pop in for a drink, so, it's an old butchers shop and it feels like it still is, bright white tiled walls, the furniture was uncomfortable, wasn't sure if it was supposed to be a bar or a restaurant, to be honest it felt like neither, poncey 2/3 of a pint glasses of for beer, what's wrong with pints ffs?? The owner struts about in dungarees, and if he has the chance to check his reflection he damn well makes sure he does. Would I eat there? Never, only had crab on the menu anyway!? Would I drink there again? Never. Would I recommend it? Only to those who want to be soooo hip (like the owner thinks he is) that they want to watch the traffic go by in this rather grey and drab area of town."