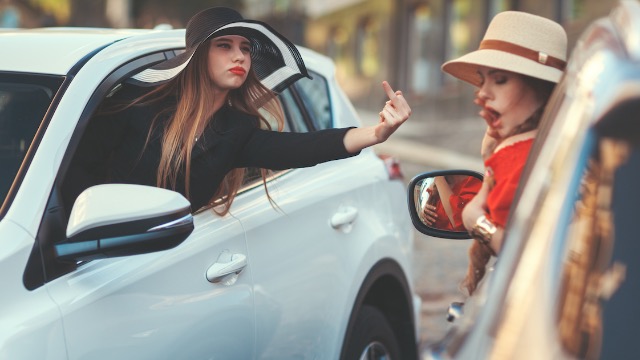 17 people share stories of bad drivers getting served karmic justice on the road.

Karma may be a b*tch, but it's also a very useful tool for punishing people for bad or unjust behavior. And there's just something about driving that seems to trigger people's worst and most unjust behavior—luckily, karma doesn't spare people just because they're in a car. Nope.

Someone asked Reddit to share their stories of "instant karma in driving." These 17 people share stories of bad or rude drivers getting the karmic justice they deserved:

So a bit ago I was driving down the road and I needed to get into the left turn lane two lanes over - mind you, I still had around a mile, so I didn't feel that worried about merging. I put on my blinker, and waited for an opportunity. Unfortunately, a woman in an SUV decided that she didn't want me to get in her lane. When I sped up, she stuck in my blind spot. When I slowed down, she did as well. Eventually, approaching the light, I cut her off to get in the turn lane. She proceeded to roll down her window, turn to me, start yelling what I imagine were obscenities, and flip me off. She then went through the red light and, to avoid a car, turned into a poll, totaling her car.