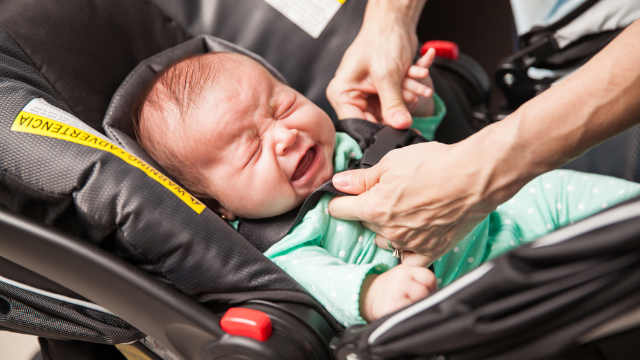 Guy told a shopping mom to leave her crying baby at home. Let's just say he regrets it now.

Of all the problems that can arise during the holidays, someone else's baby crying in a supermarket is pretty minor.

And one Reddit user just found out the hard way that if you tell the mom of a screaming baby she should've left that baby at home, you're kind of a huge a-hole.

It all started on a Reddit page called "Am I the Asshole?" where people ask — you guessed it — if their past actions were in any way assholish.

A user in Norway named PlayerSlotAvailable took to the thread to ask the following question: "AITA [Am I the asshole] for telling a woman with a baby crying in a store to not bring her baby the next time?"

I went shopping in the grocery store, when a woman brought in a baby crying out loud from before she even stepped into the store. This kept going on and on for at least 5 minutes, at least until after I had left the store. All the other customers were visibly uncomfortable with it. Before I left the store, I passed by her and I told her that the next time she went to the store, she should not bring her baby. Leave it with the father, or keep in in the car. Am I the asshole for telling her that, or is she for bringing the baby in there.

Might add that both the father, and the mother gets 15 weeks of paid paternity leave + 16 weeks to the person they choose. And kindergarden isn't something that is unaffordable, as the price is adjusted for people with a low income. There are few reasons why she would have to bring the baby with her to a crowded store.