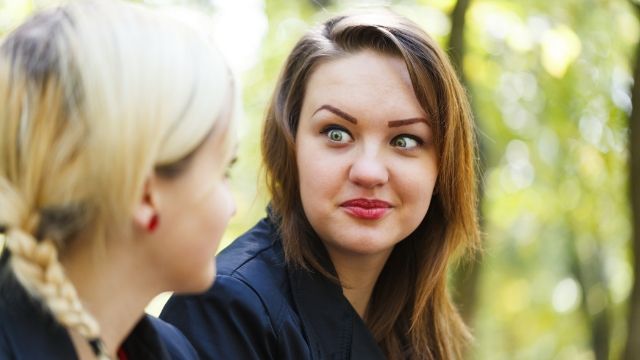 Woman asks if she was wrong to tell someone her funeral outfit was inappropriate.

Family gatherings can be a minefield — and funerals can raise people's emotions even more.

A woman recently asked Reddit's "Am I the A-hole?" forum whether she was rude for confronting her cousin's girlfriend at a funeral. And the discussion begs the question: is it ever okay to critique someone else's clothes?

The back story: the woman's great-grandmother died and the family held a Catholic mass as part of her funeral.

My great grandmother passed away a few days ago and her funeral with this morning. High Roman Catholic Mass. She was 103. One of my cousins," Joseph", brought his girlfriend "Raven". They're both 19 and if my Aunt Sandy is to be believed neither of them work but live in her basement playing video games and smoking pot.

Clearly, she's not a fan of "Joseph" and "Raven" to begin with. But it gets worse.

Joseph was a pallbearer so he wore a suit. Raven, however, showed up wearing a pair of knee length denim shorts and an orange and white flannel button up. Strangely enough she didn't seem to notice or mind that everyone else was wearing dark clothing, funeral clothing. A lot of people were giving her looks, and making comments. My great grandmother's children were especially offended.