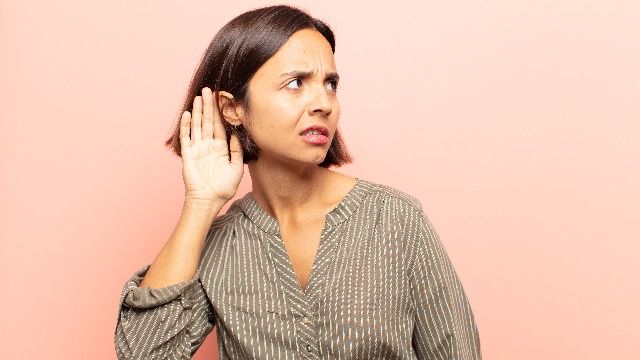 15 people share the strangest thing they overheard while eavesdropping.

Admit it: in the rare moments where you don't have earphones on in public, you're eavesdropping on strangers' conversations. It's only natural, as sound carries through space. It's just physics.

Your ears may perk up at the mention of certain words but that's just your brain responding to subconscious stimuli. While I may have totally made up these science facts, the lesson is that you shouldn't feel guilty about eavesdropping, especially when the out-of-context snippets you hear are funny.

A Reddit thread asked, "What is the craziest thing you’ve heard while eavesdropping?" Here are the funniest answers. Hopefully Baby Chlamydia is doing well.

Overheard a girl talking about names for her baby. She liked the name ‘Chlamydia.’ Said it ‘sounded exotic, Greek maybe.’

I wasn’t trying to eavesdrop, as I was like 6 or 7. My uncle’s house has split level; you walk into the living room, and the upstairs is the kitchen and bedrooms. The kitchen has an open wall that looks down into the living room. My dad and uncle were talking in the kitchen without realizing I was in the living room. But I found out my cousin isn’t related by blood. He’d been adopted by my uncle; who had met his mom when she was 6 months pregnant with my cousin. I still don’t know if my cousin knows now that he’s older, but it’s not something I can really bring up. If he does know cool; but if not…. This was also the first time I had to laugh at genetics as I got older; my cousin and his little brother look exactly alike; and both took after mom.