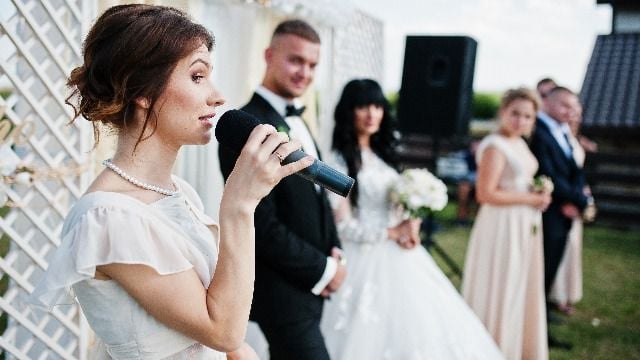 10 people share the story of the cringiest speech they've heard at a wedding.

Public speaking, heightened emotions, and an open bar make for an interesting combination. Sometimes at weddings, members of a wedding party can't handle the mix and end up making absolute fools of themselves, much to the horror of everyone in the room and the delight of people on the internet. A thread on the subreddit Wedding Shaming had people dishing on the most uncomfortable speeches they've ever witnessed...or in one case, gave themselves.

1. Big "Ted from How I Met Your Mother" Energy.

A few years ago, we were at a friend's wedding. We had met the bride through the groom, so we didn't really know her friends. They both had mixed bridal parties, with some bridesmaids, some bridesmen, some groomsmen, and some groomsmaids - a little unusual, but pretty cool. The bride had a Man of Honor instead of a Maid/Matron of Honor, who was someone we'd never met. Not super weird, since like I said, we hadn't met most of her friends.

EXCEPT. The MOH was clearly in love with the bride. Watched her every step with puppy-dog eyes, touched her arm at every opportunity, the works. It miiiiiight have been taken as concern that she was having a good time or whatever, until we got to the speeches. The best man made a pretty typical speech, "I've known Groom for X years; [silly but inoffensive anecdote]; I was so happy for him when he met Bride; [praise for bride]; you're a wonderful couple; would everyone please join me in toasting their marriage." Very nice, very classy.