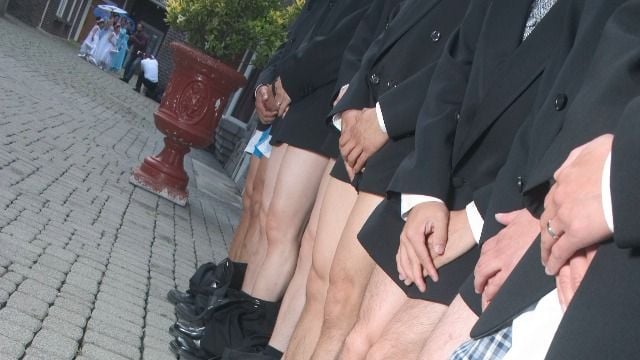 Groomsman asks if he was wrong for not wanting to be in 'pants down' wedding photo.

Is it "diva" behavior to want to keep your pants on in wedding photos? According to one group of bros, it is.

A guy wrote into "Am I The A**hole?" after he was given a hard time by his sister, her groom, and his fellow groomsman for being hesitant to pull his pants down in a public park for pics.

He was hesitant to drop trou, not just because of the awkwardness of the moment or the fact that his extended family, past and present, will see him in his undergarments. The pantless pic of him would be immortalized for future generations, and that did not particularly appeal to him.

So we’re in some park taking pictures before the ceremony and the photographer tells us that he wants a picture where the groomsmen have their pants around their ankles. I was very caught off guard by this, but Dave and the other groomsmen found it funny and dropped their pants right away. Now I’m not self-conscious about my body or anything (I’m an athlete, so I’m in decent shape), but I still find it awkward and embarrassing to be photographed with strangers in a public park in my underwear. I told them that I didn’t feel comfortable and I’d be happy to sit this one out (all of the rest of the groomsmen are Dave’s college buddies, so it’s not like a picture with just them would’ve been weird anyway), but they kept insisting. This went on for several minutes (Dave arguing with me with his pants around his ankles the entire time), and even my sister said I was making things difficult.