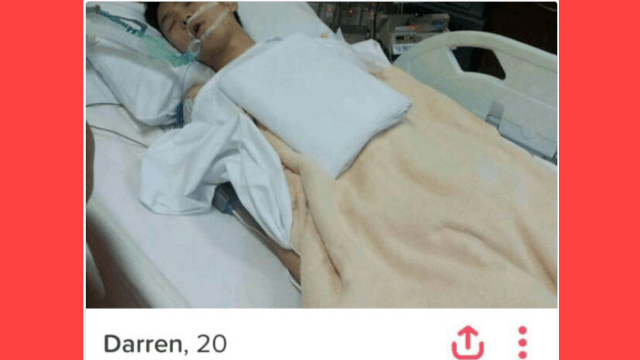 Everyone loves a good, creative dating profile, so it makes sense that this one has gone viral.

A screenshot of a particularly punny (and maybe just a little bit morbid) Tinder profile belonging to a man named Darren has been making the rounds on Twitter and Reddit - and we have to say, it's pretty hilarious.

What in the fresh hell is going on in Tinder.... pic.twitter.com/hw2uVR4keB

Along with a photo of Darren in a hospital bed, his bio reads:

I am dying to meet you.

According to Buzzfeed News, Darren is a 20-year-old college student from Malaysia. He wasn't having too much luck on Twitter, so he decided to give his bio a little bit of a makeover.

""Having a 'normal,' 'civilized,' and 'pretty' bio didn't work, [so] why not try something different?" Darren told Buzzfeed. "So, I thought of using my dark humor and love for puns to try and find like-minded people."

That's when one of Darren's friends had the idea for him to use a photo from a heart surgery he had back in 2012. (Don't worry, he's fine now.)

Once the internet caught wind of Darren's profile, it quickly went viral.