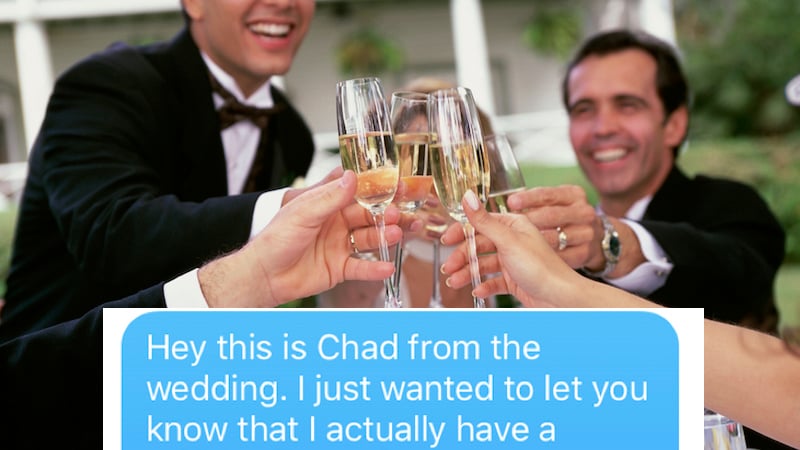 Straight guy's response to gay guy who gave him his number is a master class in not being awkward.

A gay guy gave his number to a straight guy at a wedding, and the straight guy charmed the Internet by being totally chill and not a dick about it. Imgur user mattim0s posted yesterday about an accidentally lovely text exchange he had with a guy he met at his cousin's wedding reception. Near the end of the night, the guy came up to him, told him he was into him, and gave him his number. mattim0s decided to text him later that night, letting him know that he was straight, but commending him on his bravery for coming up to him cold:

I was at my cousins wedding reception and had just sat down from dancing. It was nearing the end of the night at this time so I was pretty secluded from everyone. A man walked up to me who I hadn't seen before and nervously said "what's your name?" I replied, "Chad, what's yours?" He said "Shane, I just wanted to let you know that I have noticed you all night. I wanted to leave this with you before I left." He handed me a piece of paper and quickly walked out. It was his number. Without knowing if I was straight or not he had built up the guts to put himself out there. I thought it was extremely brave and I know it's something I wouldn't be able to do. I'm sharing this to remind everyone to live their lives without regrets. Almost all of my regrets come from the things I didn't do, not the things I did. I will be living my life more like this man and I suggest you all do as well. Good night.