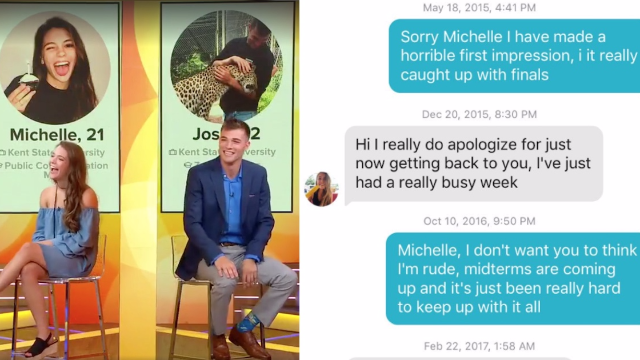 If you are a regular reader of the internet, you may remember a Tinder conversation that went viral earlier this month between two college students who kept up a joke that they were too "busy" to actually meet in person.

The two students, Josh and Michelle, would periodically text each other excuses for not responding to the other's previous message. There would often be months in between texts, and their conversation has gone on for three years now.

The joke came to the internet's attention earlier this month, when Josh tweeted out a screen shot of his Tinder conversation with Michelle. It quickly went viral.

Hahahaha one day I'm going to meet this girl and it's going to be epic. Look at the dates of our tinder texts. pic.twitter.com/DASQK4c5cX